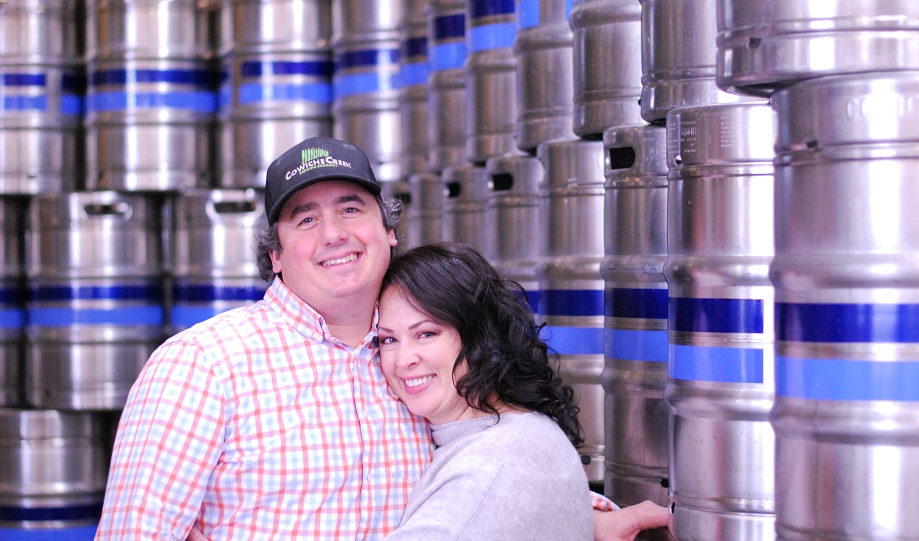 We Love Hops. Period. Oh and Beer too. We also love building things like keg washers, brew houses, cold rooms, hop yards, to you name it - we are building it - all to create beers with a strong taste of our valley's hops.

Cowiche Creek Brewing Company was formed in 2014 by wife and husband Maria and Derrick Nordberg. It was a tough 2 years of work to build everything but we know you will agree that it was worth the extra effort! We look forward to hosting you whether it be at our estate brewery or at an establishment in town. ¡Salud!

Growing up as third generation farmers from small towns in Central Washington, we are no strangers to hard work. In 2012 we dove into home brewing and then growing hops to create beers that made the flavors and aromas of hops stand out. We built our own brew house, recreated commercial processes and beers, planted hop yards, and set out to build our own style of beers that were less malt and a ton more hops. Not more bitter but instead bursting with aroma and flavor. The citrus, pine, and tropical fruit notes are what we love about our valley's hops.

After a couple of years of brewing dozens and dozens of batches, the brewing experiments had taken over our house. The garage, the kitchen, the mud room, three fridges, a freezer, and a makeshift cold room. We needed a bigger system and more room.

Out came the spreadsheets. Forecasting, the business plan, the marketing plan, COGS, and COGM estimates were built. Budgets, building material quotes, loans, permits, and course of construction insurance followed. September 13, 2015 we started construction. Our budget was tight. Worse than shoestring tight. We had to do as much of the work ourselves as possible to complete it. From Excavation to ADA grab bars, we did it all.

On October 1st 2016 we debuted our first commercial beer at the Fresh Hop Ale Festival downtown Yakima. It was loaded with 30 lbs to the barrel with fresh hops and sold out before 9:00.

We spent the next four and a half months getting our 20 BBL brew house dialed in and brewed our first batch on February 18, 2017. Many 100+ hour weeks of building and we were finally to the somewhat fun part of this business plan - Grand Opening April 15th 2017.